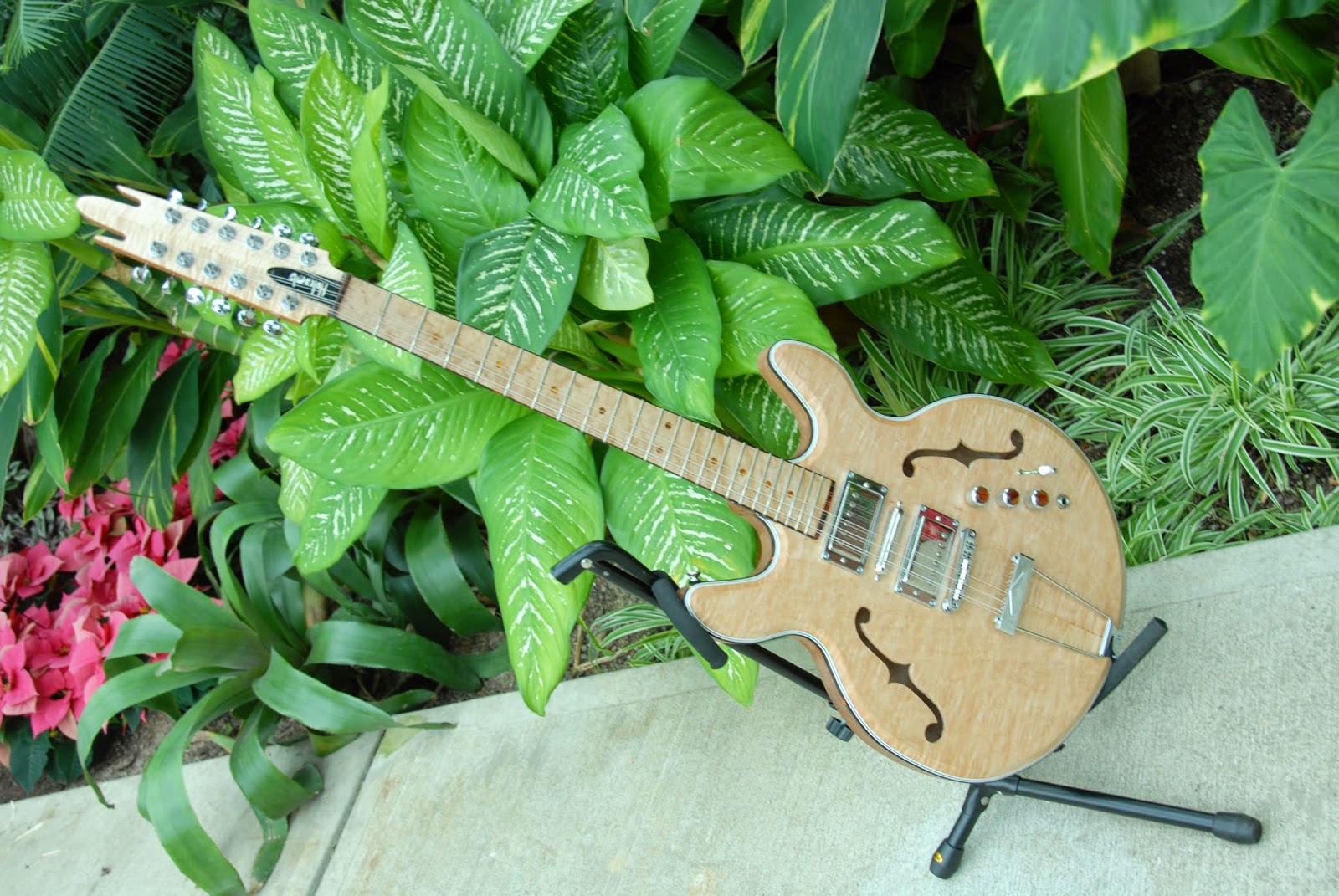 This guitar is the result of a collaboration between myself and a good friend to whom this guitar now belongs. I usually steer away from requests involving shapes or specs that I haven’t already put together. But every once and a while someone comes along that knows exactly what they want and that request happens to coincide with something that I have been itching to build.

We started with the basic idea of an archtop guitar’s tone coupled with the output and durability of a solid body electric guitar. This guitar is probably as thick as a slab body guitar, but almost twice as big and half the weight. It features three individual cavities that marry the tonal characteristics of braced archtops and chambered solid bodies. By marrying these types of internal structures, we were also able to introduce a back plate for easier access to the electrical components.

In a lot of ways, this guitar was my homage to classic designs, materials and aesthetics. But it wouldn’t be a Holcomb Guitar without a conscious attempt to  put my own spin on the classic treatments. Here’s a rundown of the ins and outs of this one.

The coil tapped humbuckers give an amazing range of tonal possibilities combined with the lipstick. The coil tap was essential to mitigate the discrepancy in output between the humbuckers and single coil.

The wood combinations are pretty traditional by most standards. I did, however, mill the top to the thinnest dimension possible for as much resonance and clarity as possibility. The neck is a set neck, which is a rarity for my builds, but I used a special dovetail neck joint with a very scant amount of glue to ensure the neck and body would be as sonically compatible as possible.

The whole guitar is finished with hand rubbed shellac. The maple is so figured that it catches a lot of light on its own. I didn't want to finish it with lacquer and run the risk of it looking super flashy and loud. My goal with figured woods is to tone them down so they don't look like a holographic sticker.

Here are some kind words from the owner -

"There is always one big reason for getting a new instrument, and then--typically--a little tornado of different small reasons buzzing around as well.

The big reason is always the eternal search for the sound.


When I met Nick, the little tornado of other reasons was gathering strength. I was walking out of the glass studio where I sometimes work and he was walking into his studio holding a kick drum so I struck up a conversation about music instantly. We got along famously from word go and this meeting joined the tornado.

Shortly before I met Nick I had given my first electric guitar to a dear friend and I was missing it a little bit. It was a 1972 Epiphone EA-250 in cherry red (the epi version of Gibson ES-335). At that time as well, I had formed a new band and I was writing a good deal of material. I was doing all my writing on a '63 Framus Camping King 12 string, while the axe for the band was a Stratocaster. So there was some disconnect from the original concept of the song to its realization in the full band format. Even the tiger maple on the body and headstock and the tiger Birdseye maple on the neck arrived around that time from my brother-in-law; offering it up if I'd had any need of it in my own work as a glass maker.

The style and look of this guitar was birthed from all these little reasons filtered through Nick's know-how and knowledge of guitars, tone woods, and construction styles. Originally I asked Nick to make me semi-hollowed body guitar styled similarly to a 335, with two bolt-on necks that I could switch in and out: a 12 string neck and a 6 string neck. I wanted to have a floating bridge with interchangeable saddles (one for 12 and one for 6). It was going to be a modular guitar.

As I spoke more with Nick and he taught me about different construction styles and the reasons for doing it this way or that, the original design changed. Nick helped to steer the design to the final form. And as Martha says, it's a good thing. Nick suggested a set neck, humbuckers rather than a traditional strat pup configuration, as well as the neck and headstock design.  His aesthetic too led to beautiful appointments throughout--the classy binding, the perfect chamfer on the top, the mellow hand-rubbed shellac finish. That's just a short list, but without a doubt it was rewarding collaboration.

Then there's the sound. The neck is warm and acoustic, the bridge has meat to it while at the same time squawky with attitude, and the lipstick is brittle and bright and loves to be drenched in spring reverb. Come hear it sometime.  Hats off to Nick!" 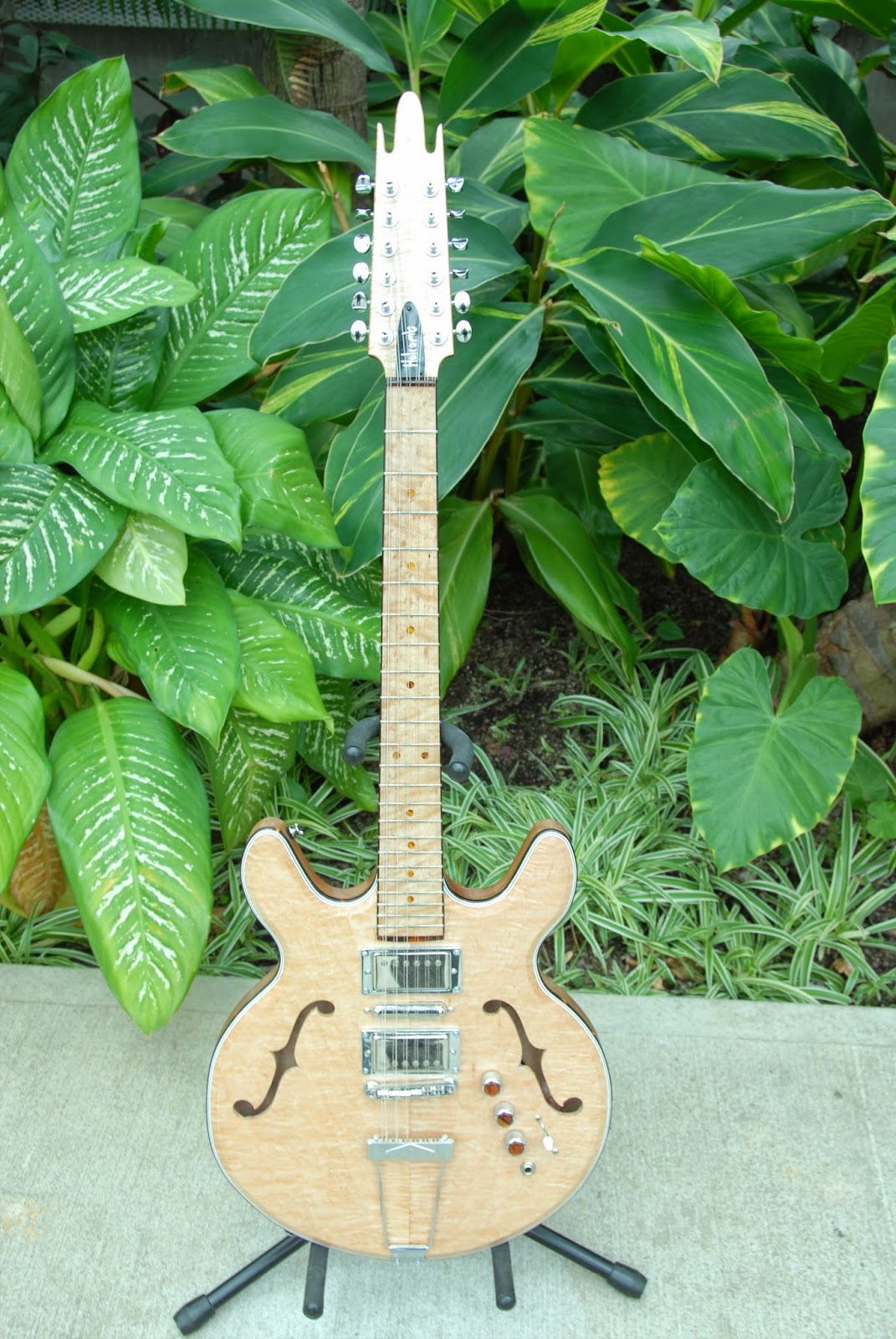 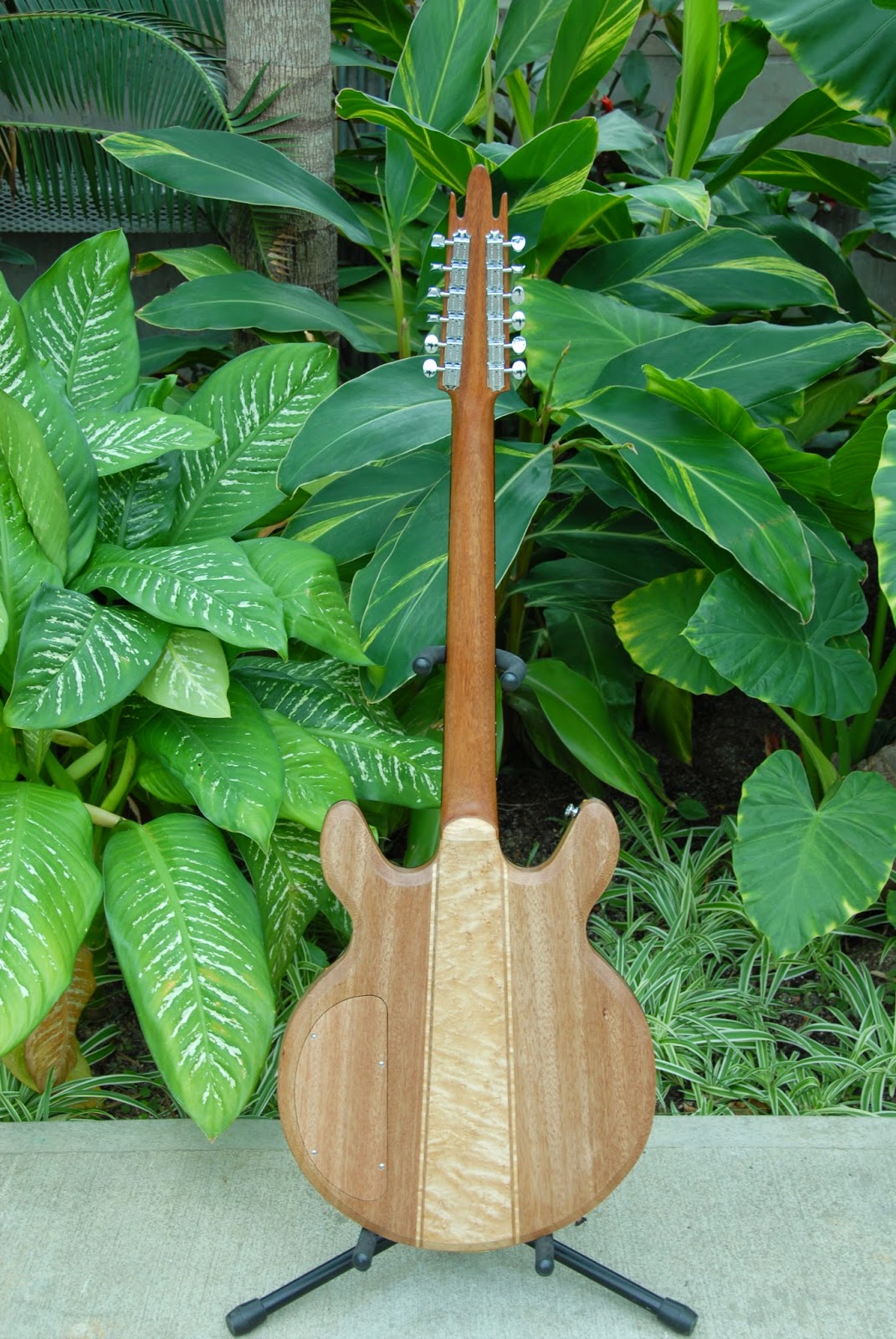 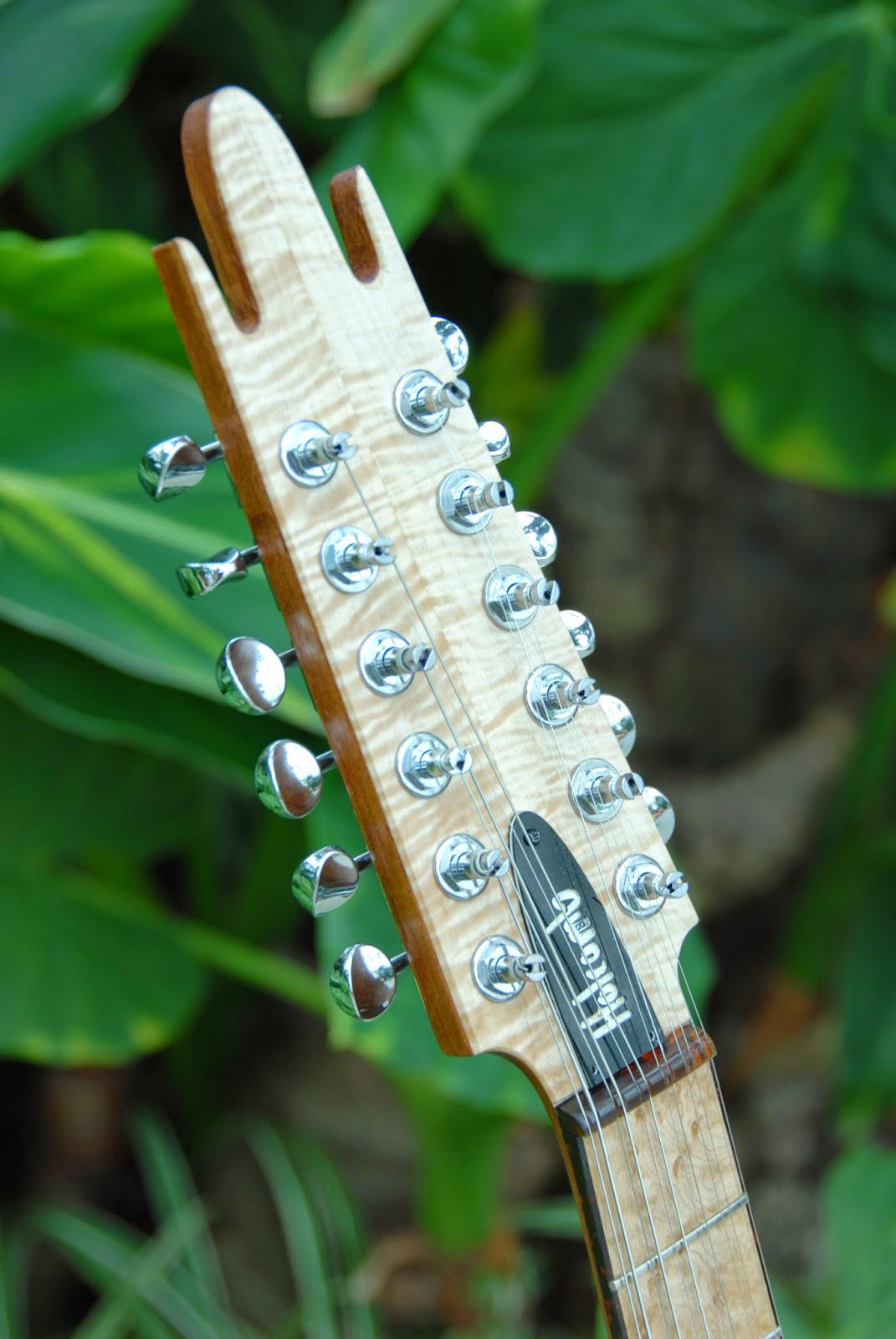 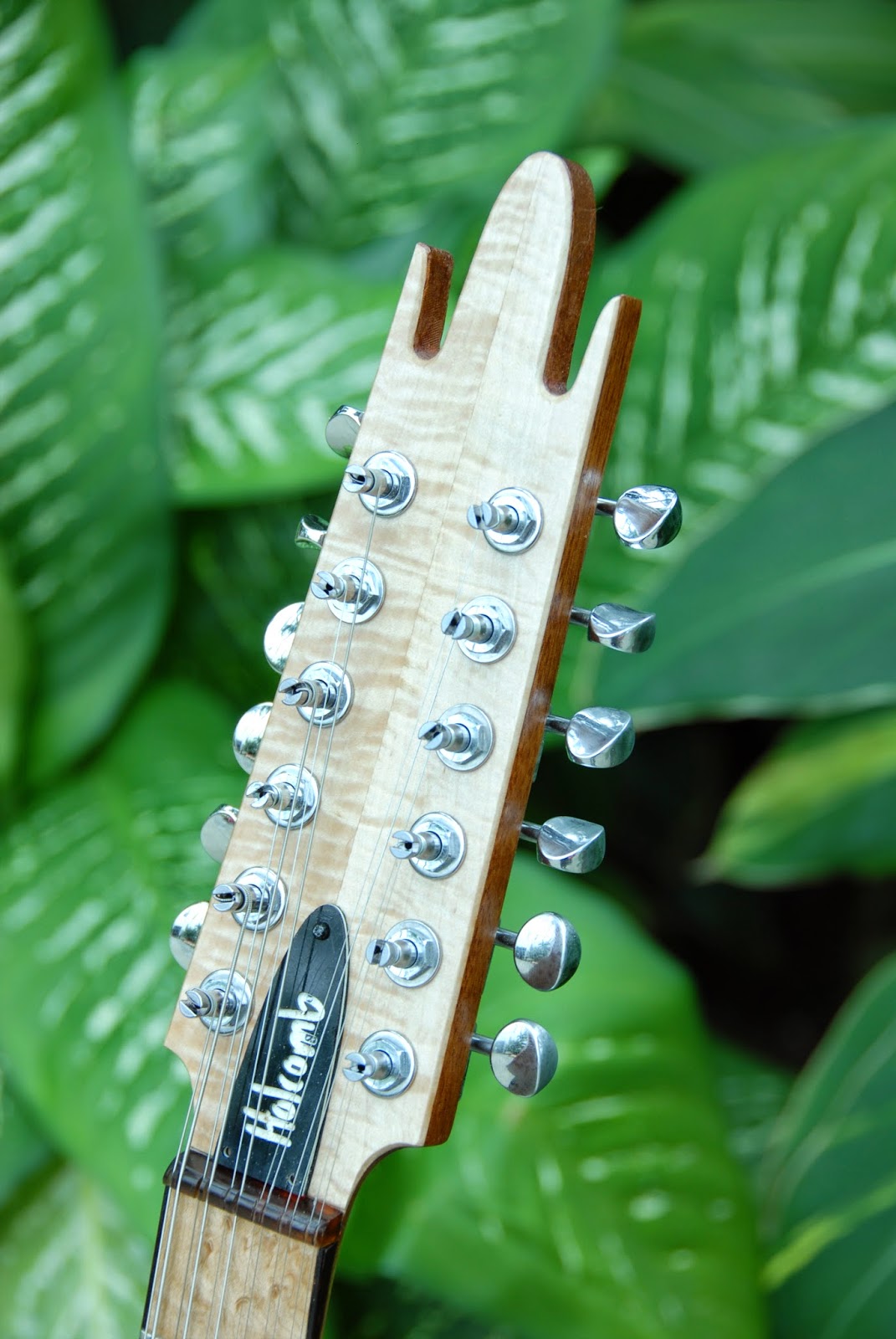 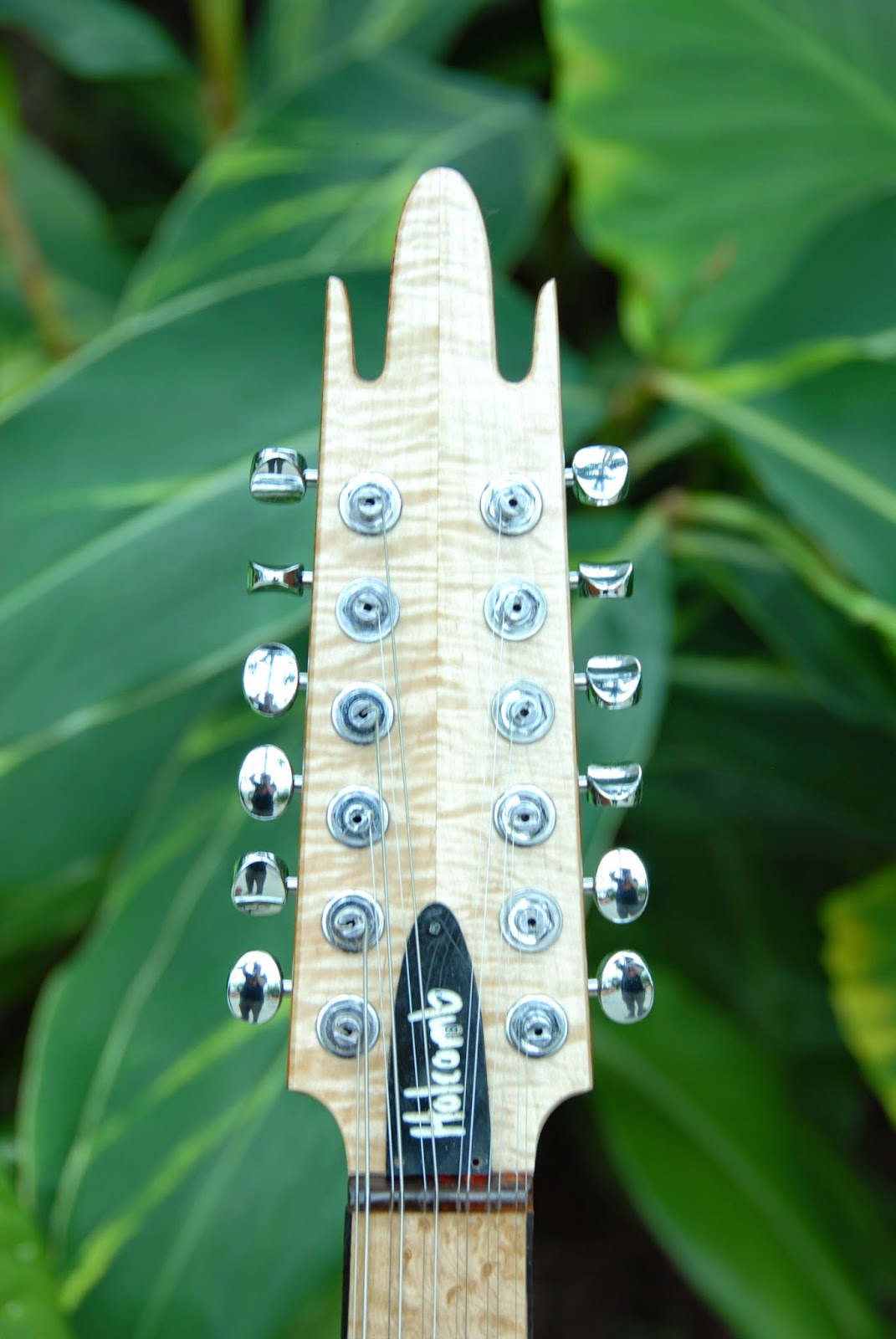 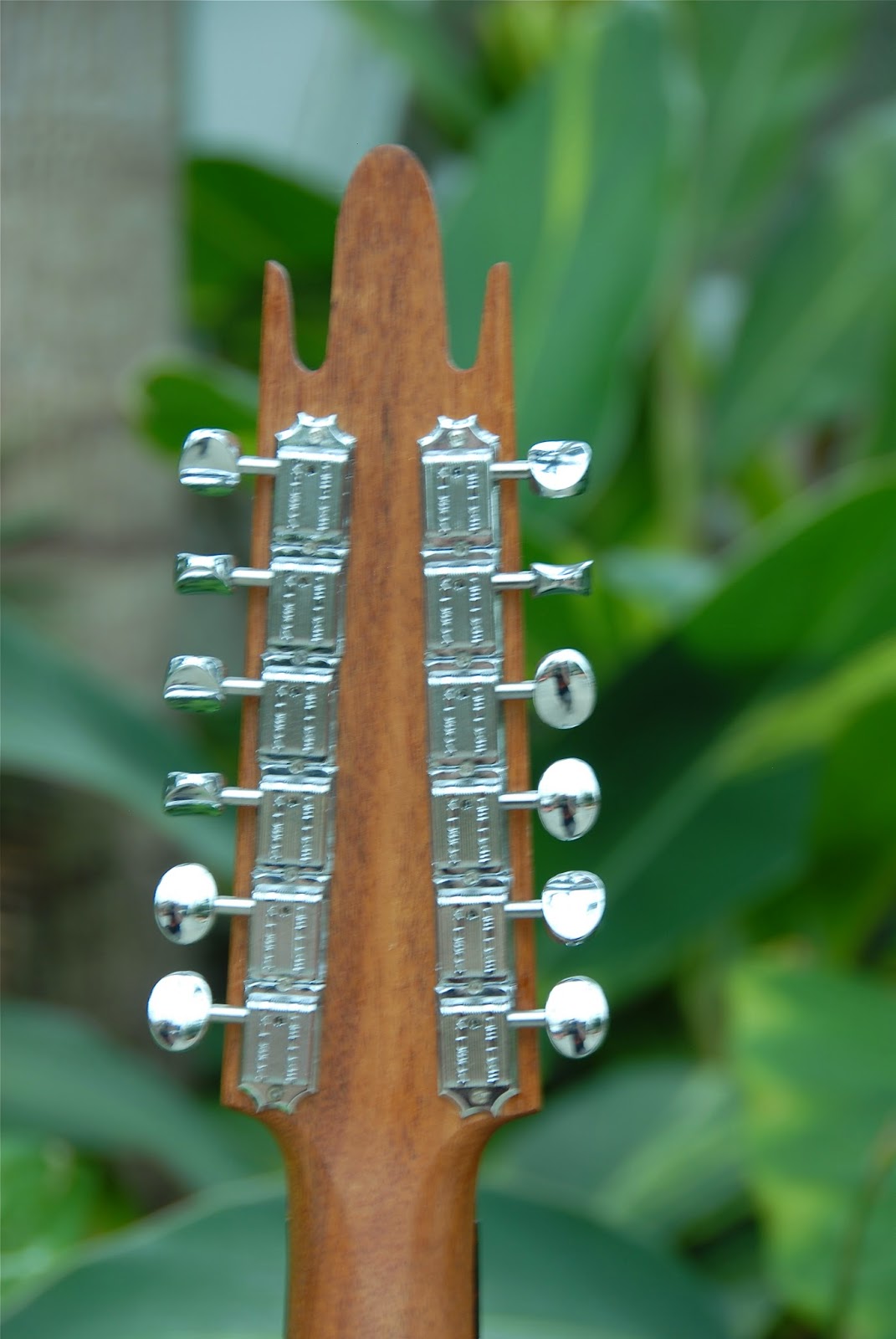 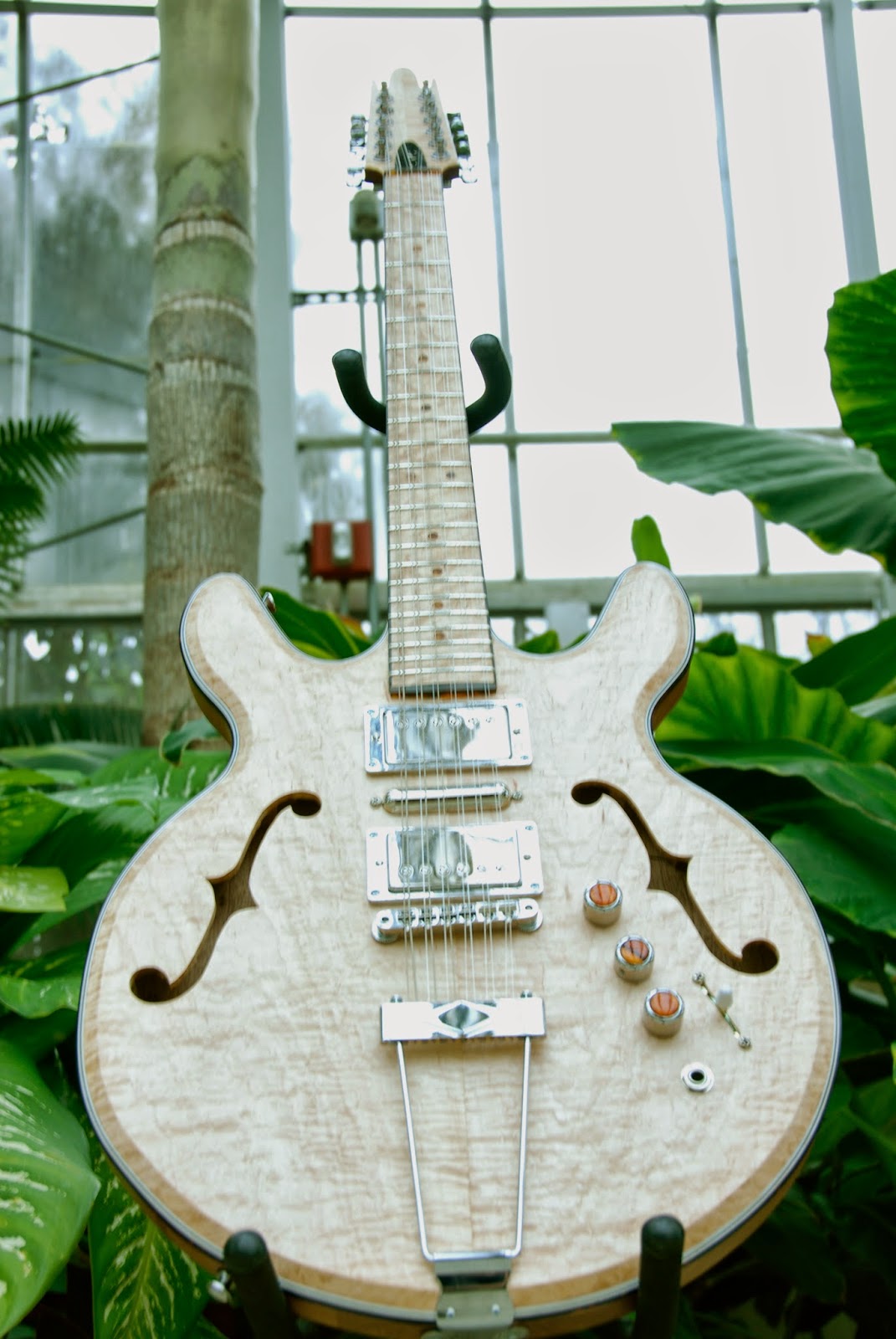 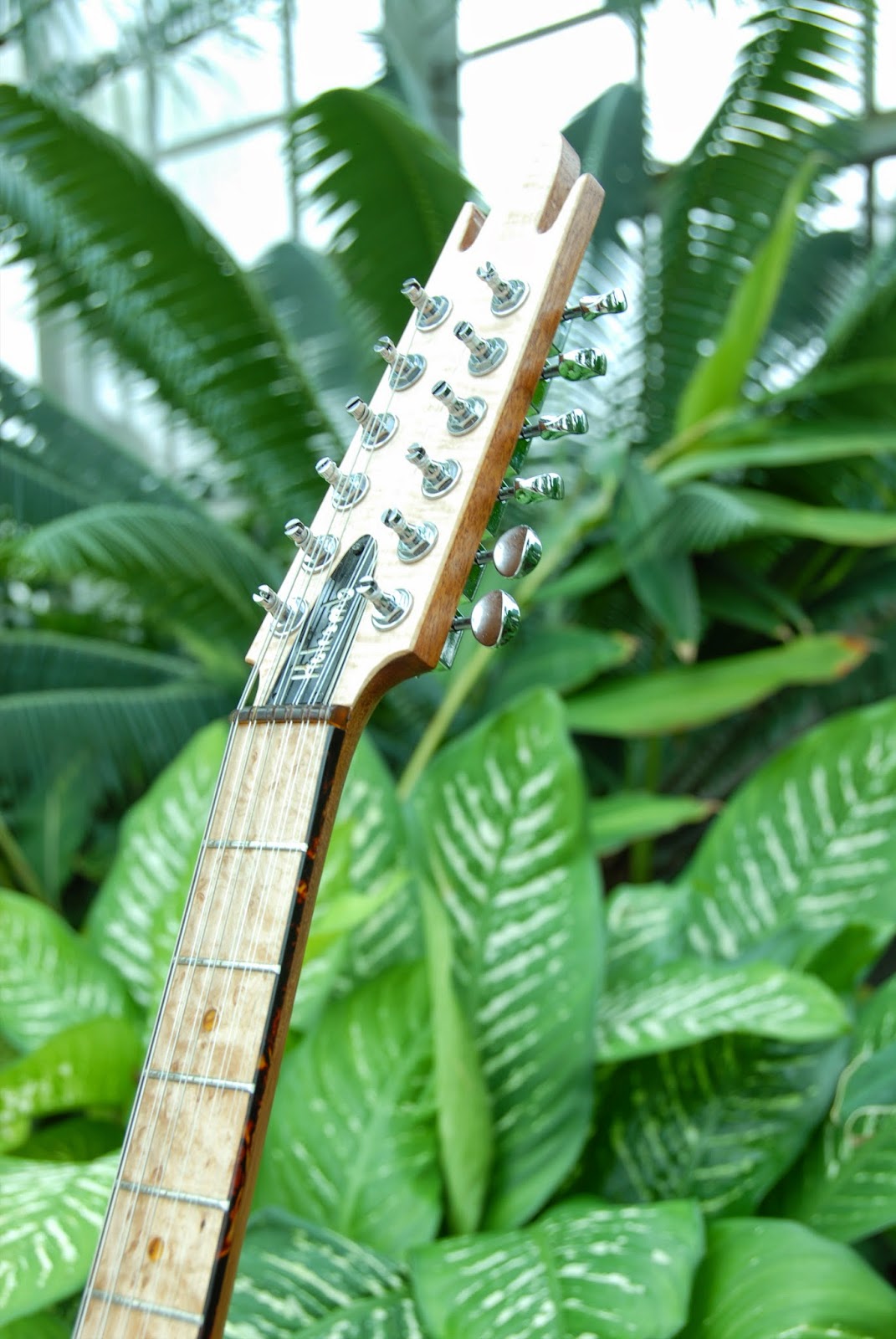 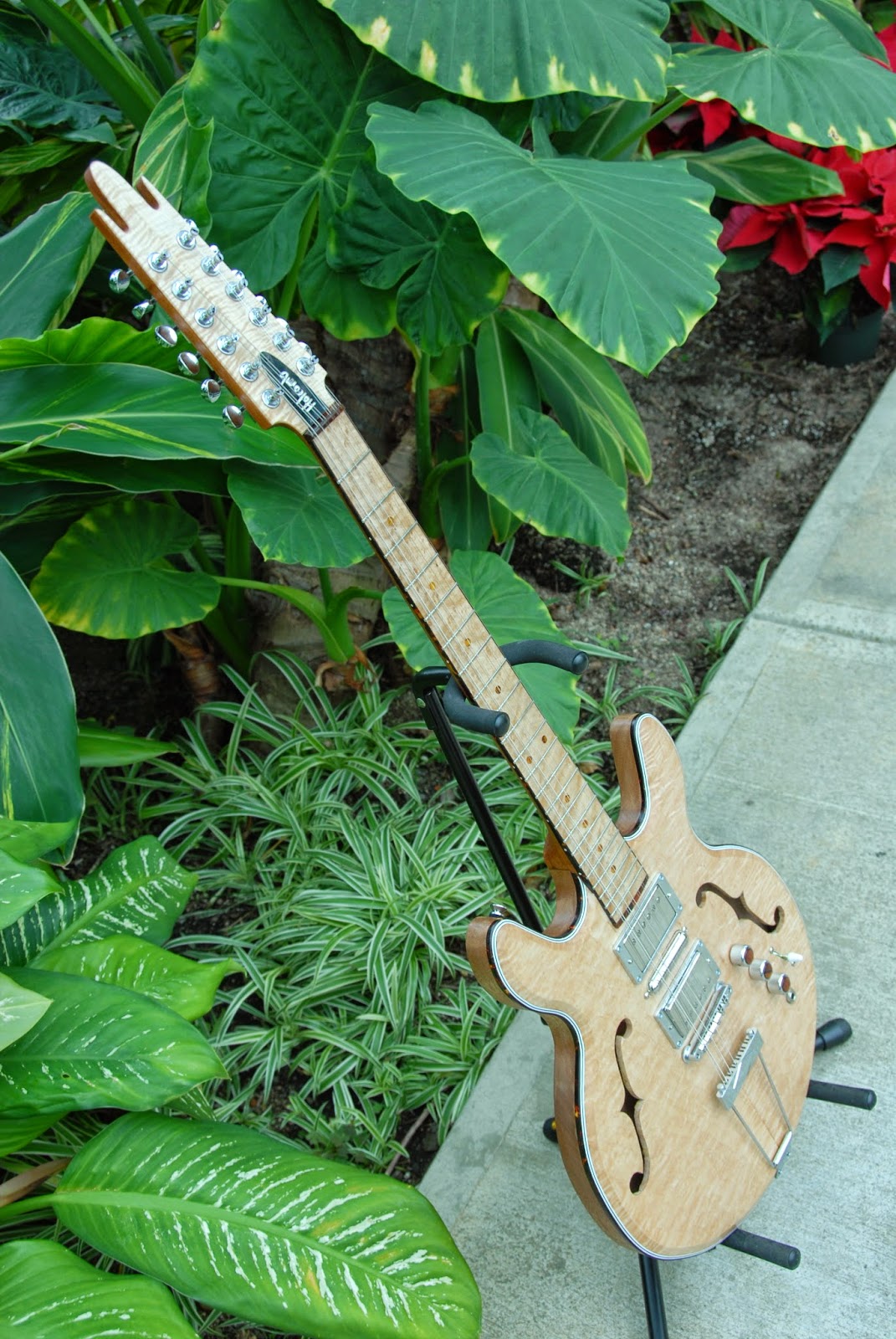 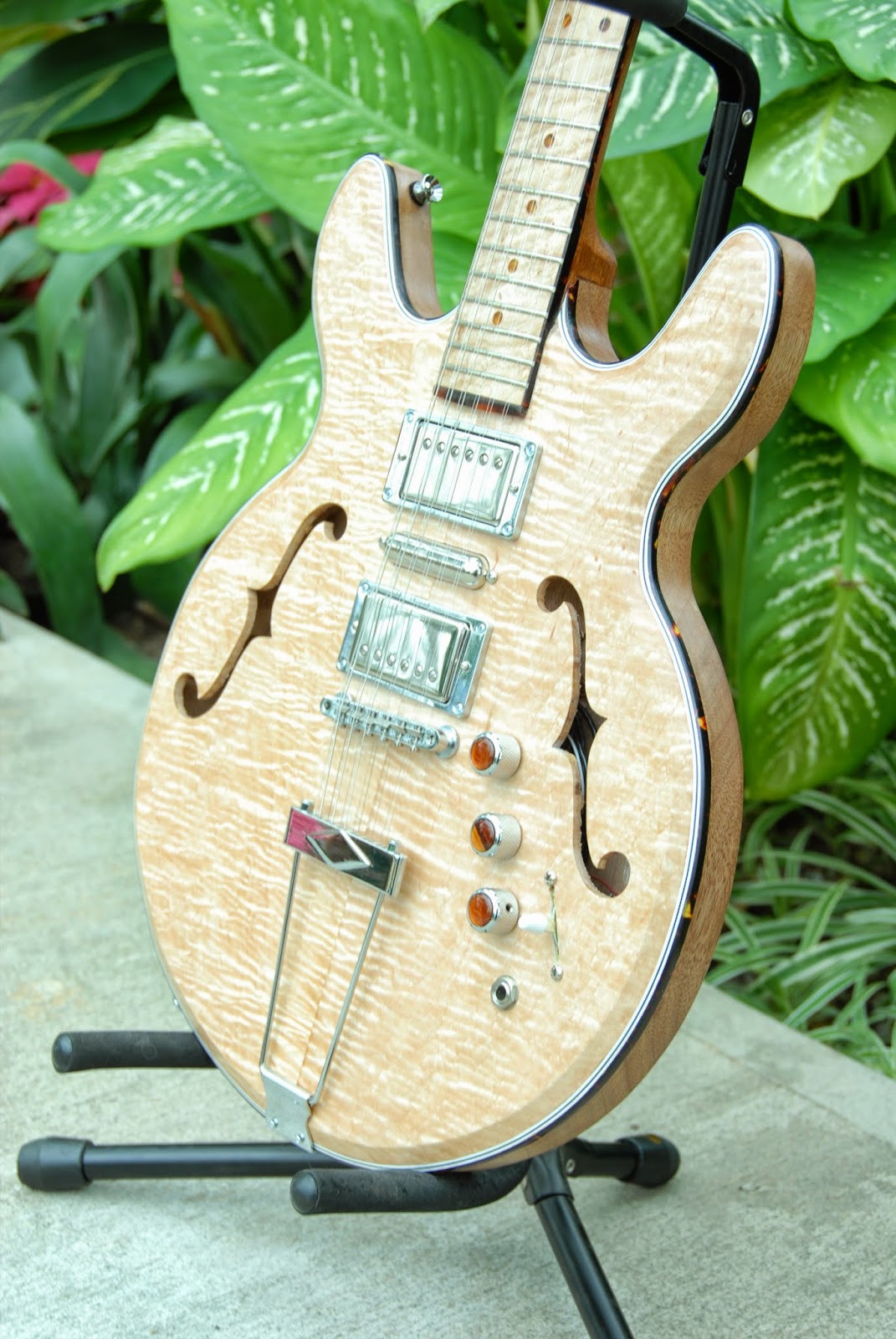 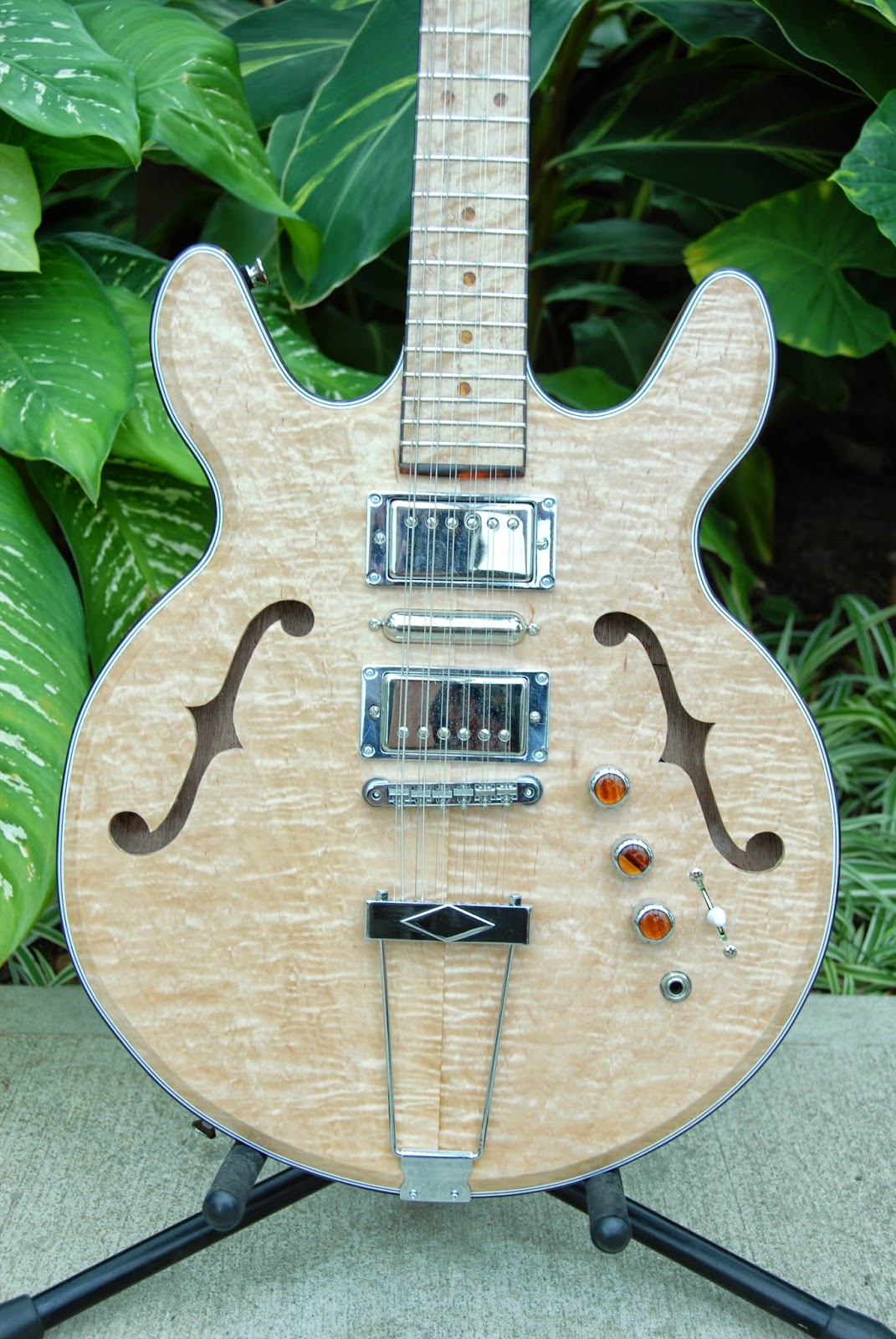 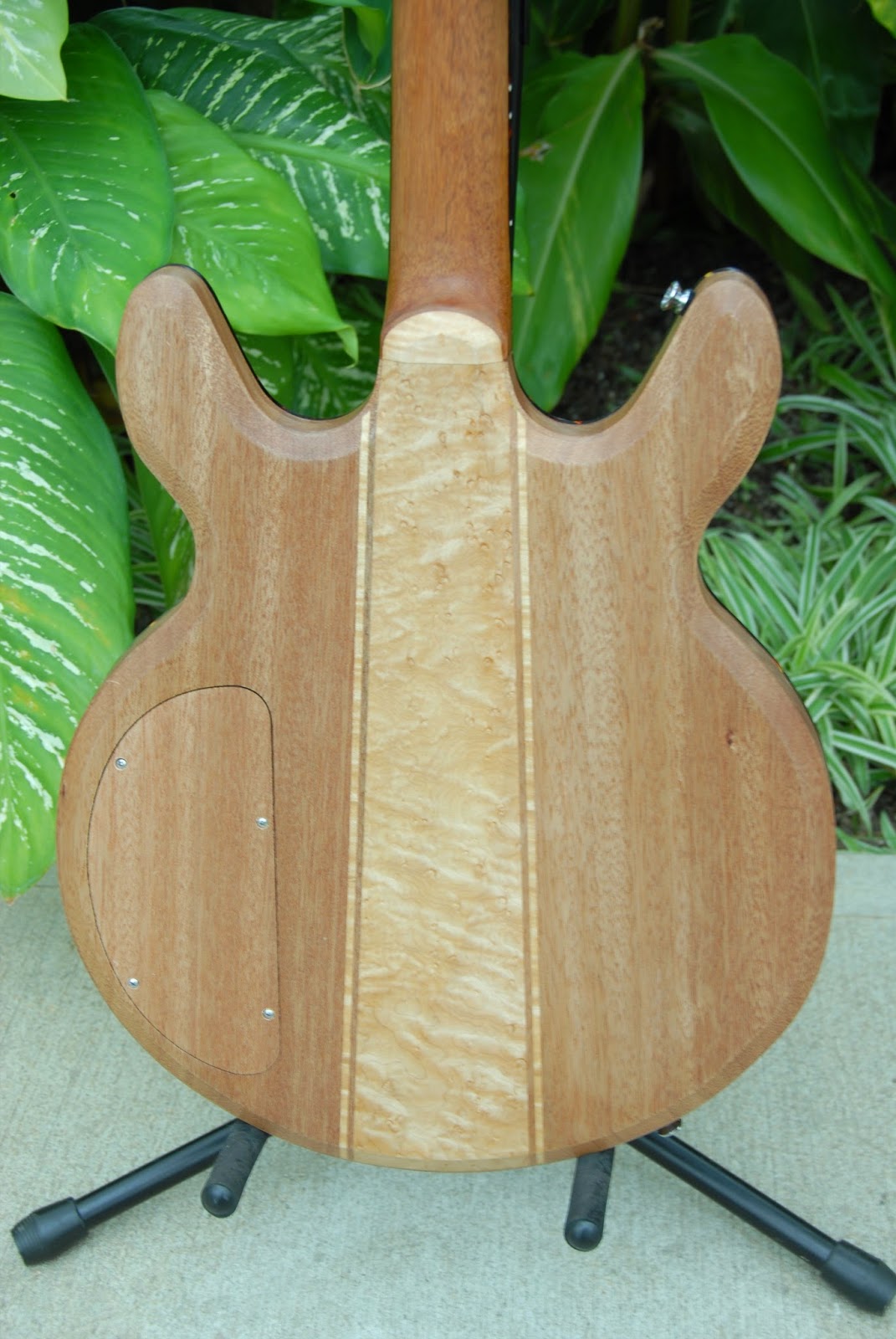 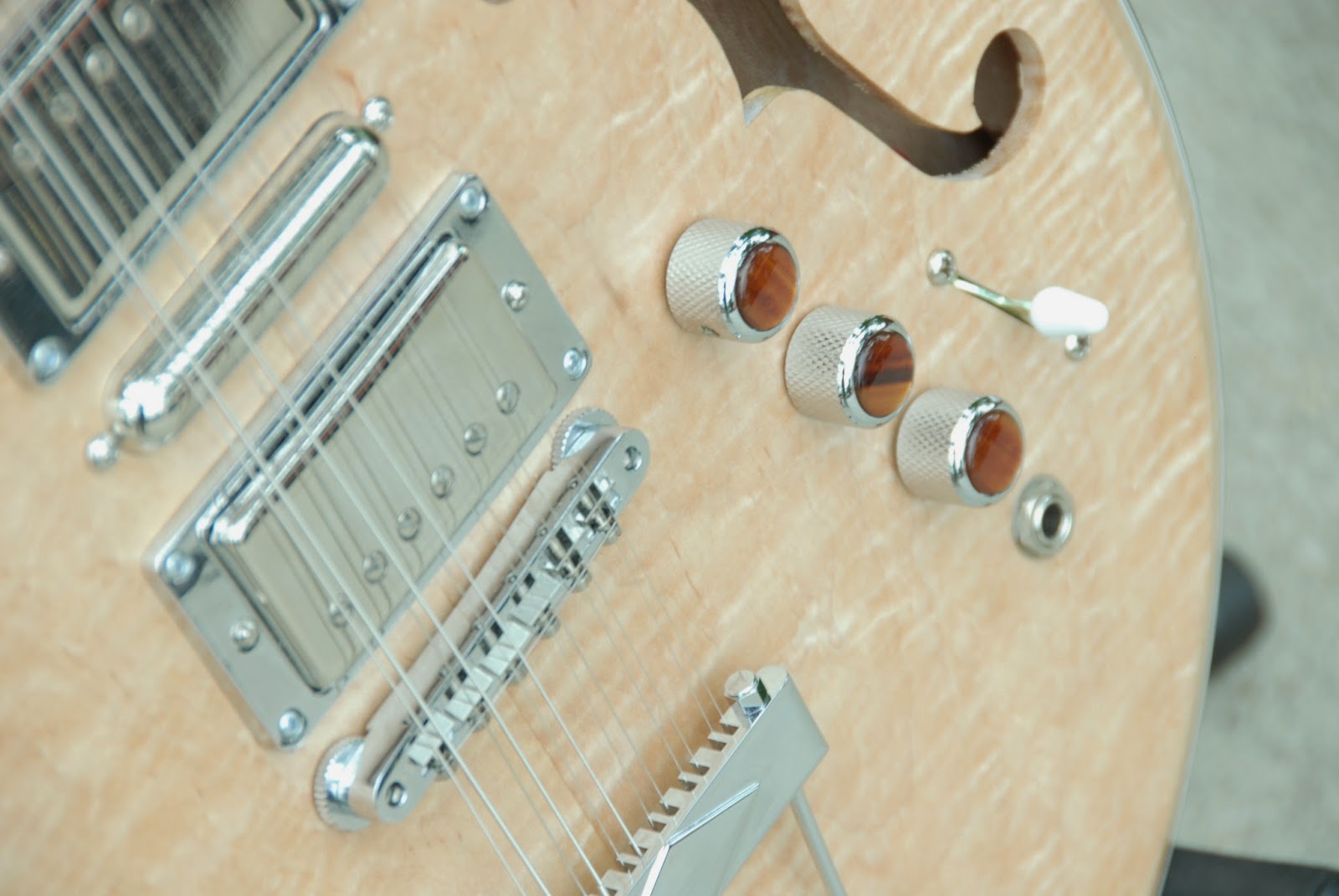 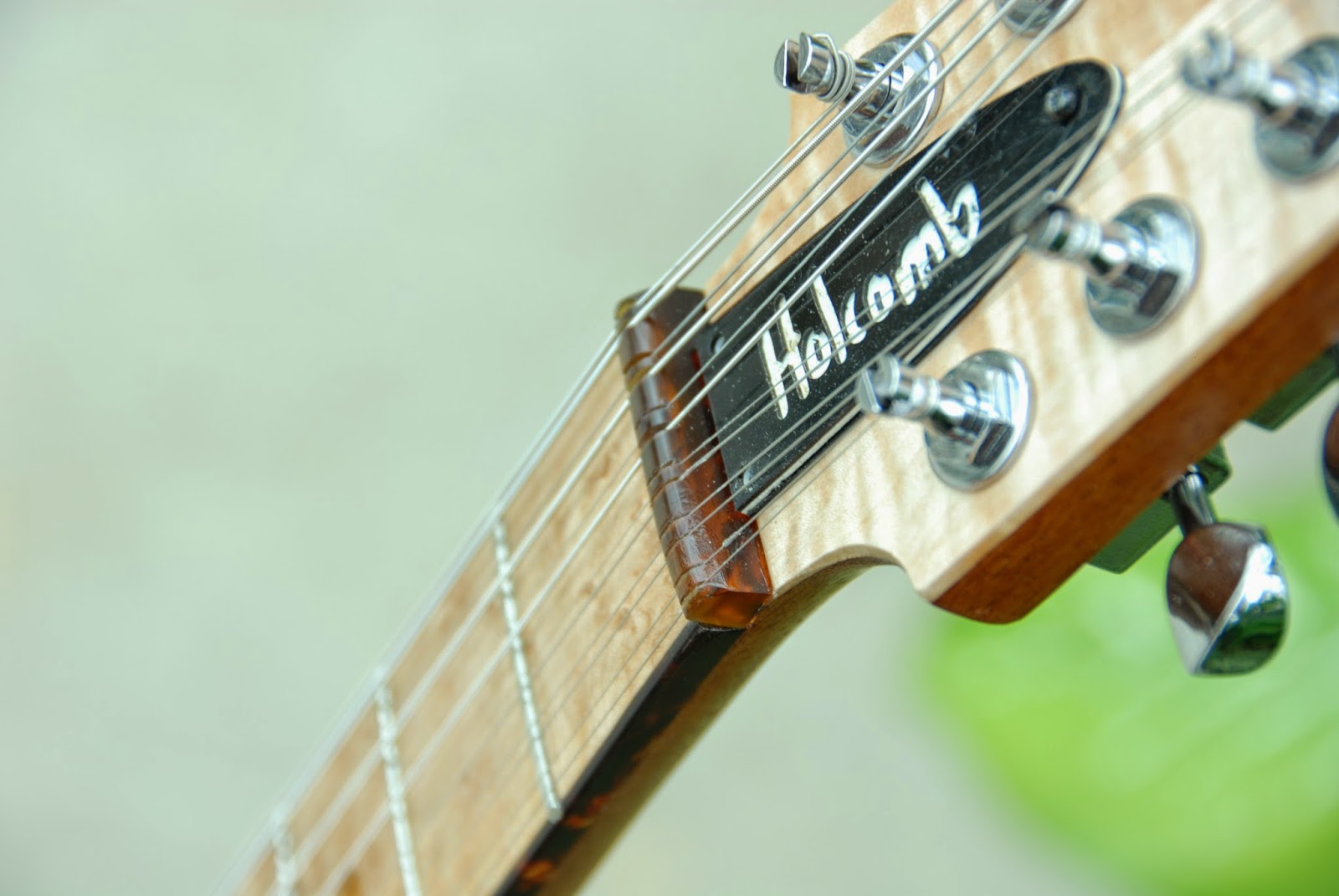 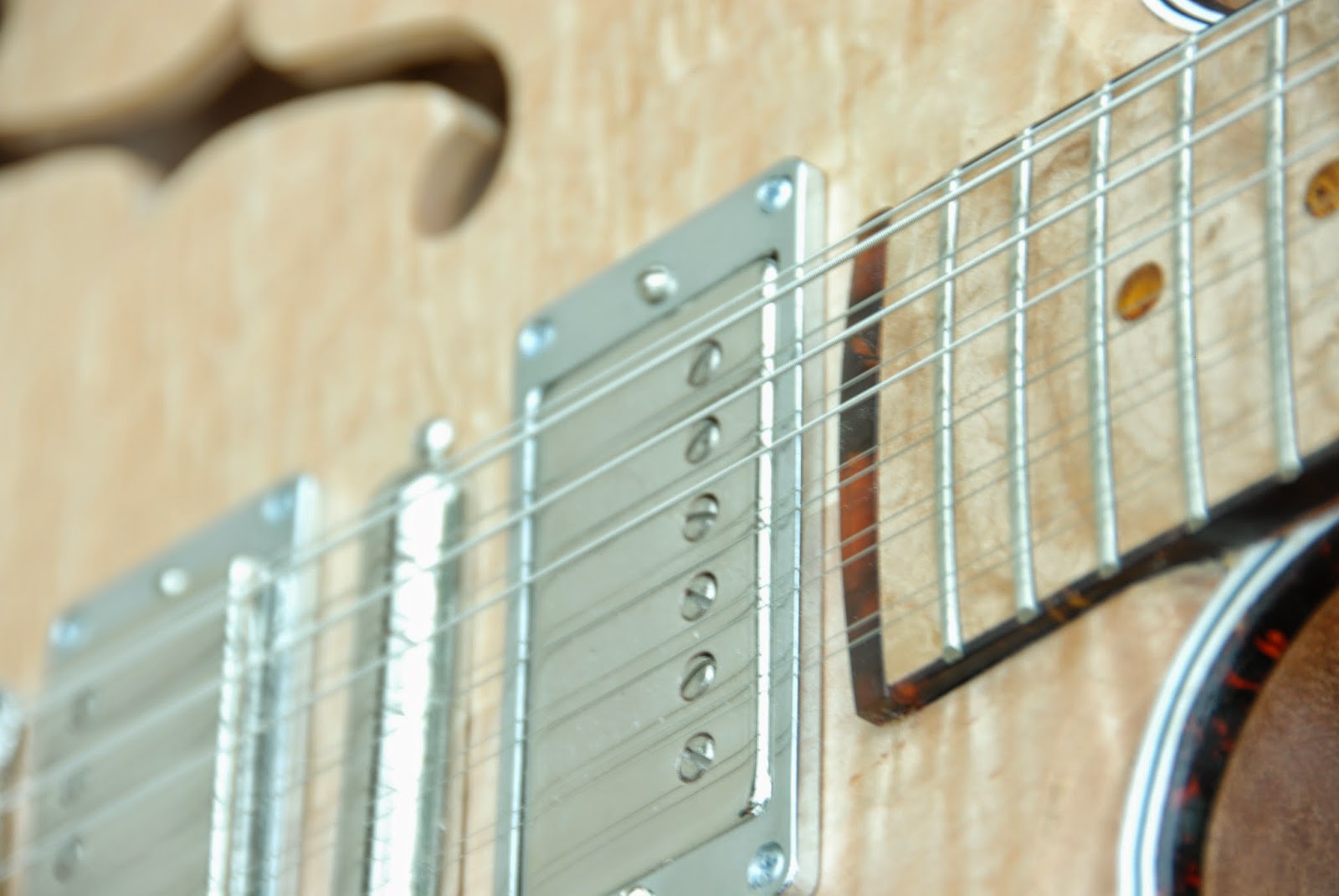 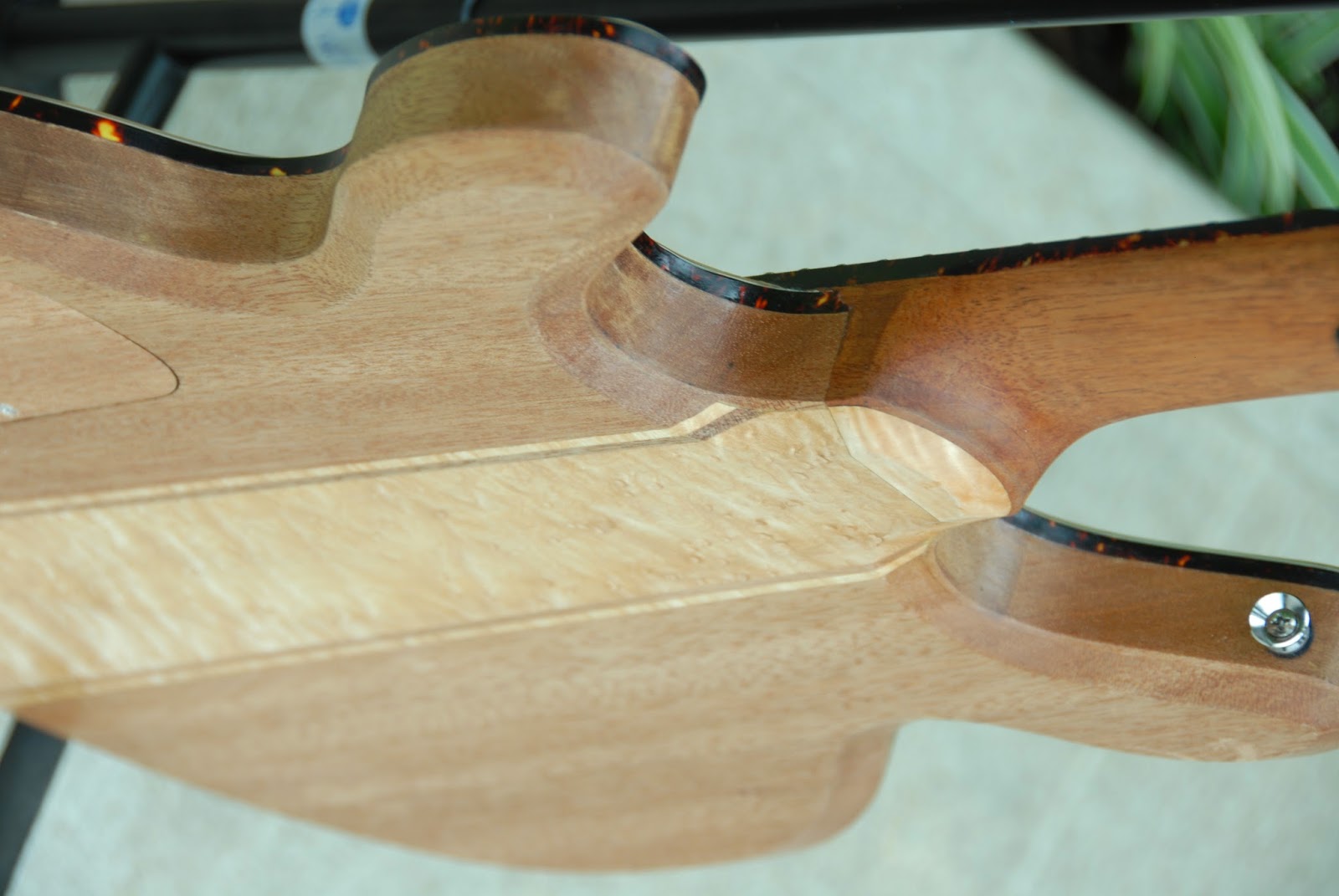 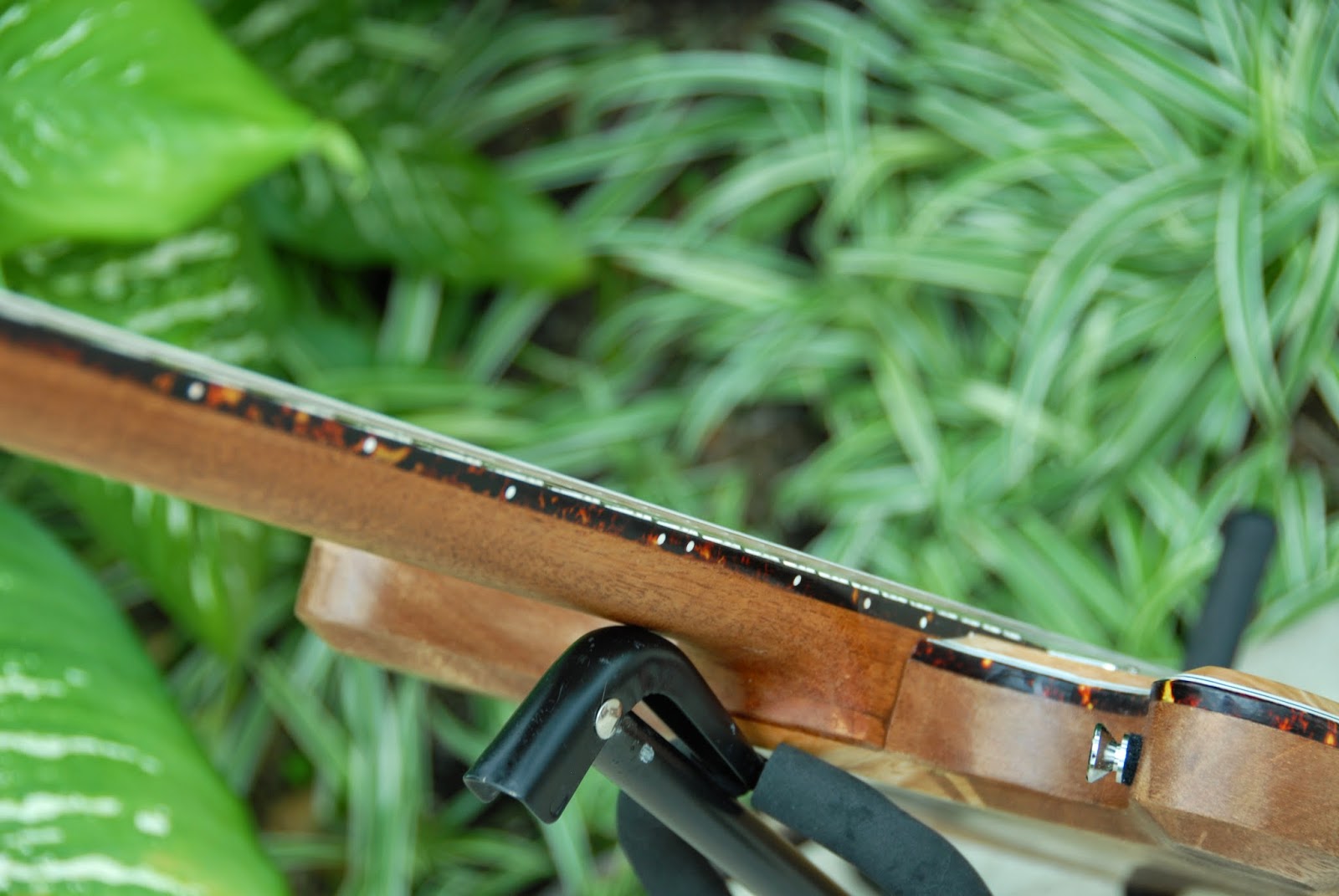 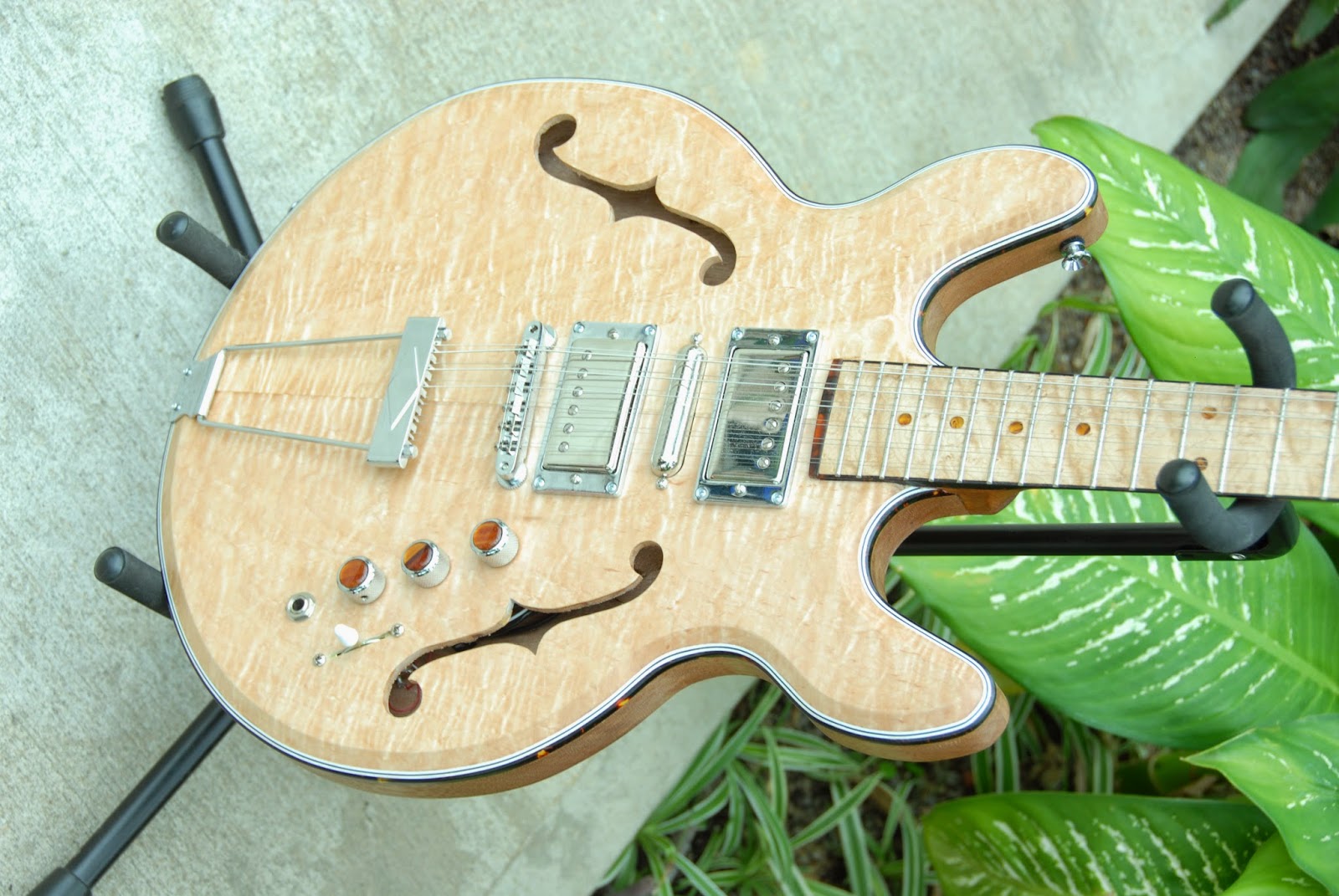 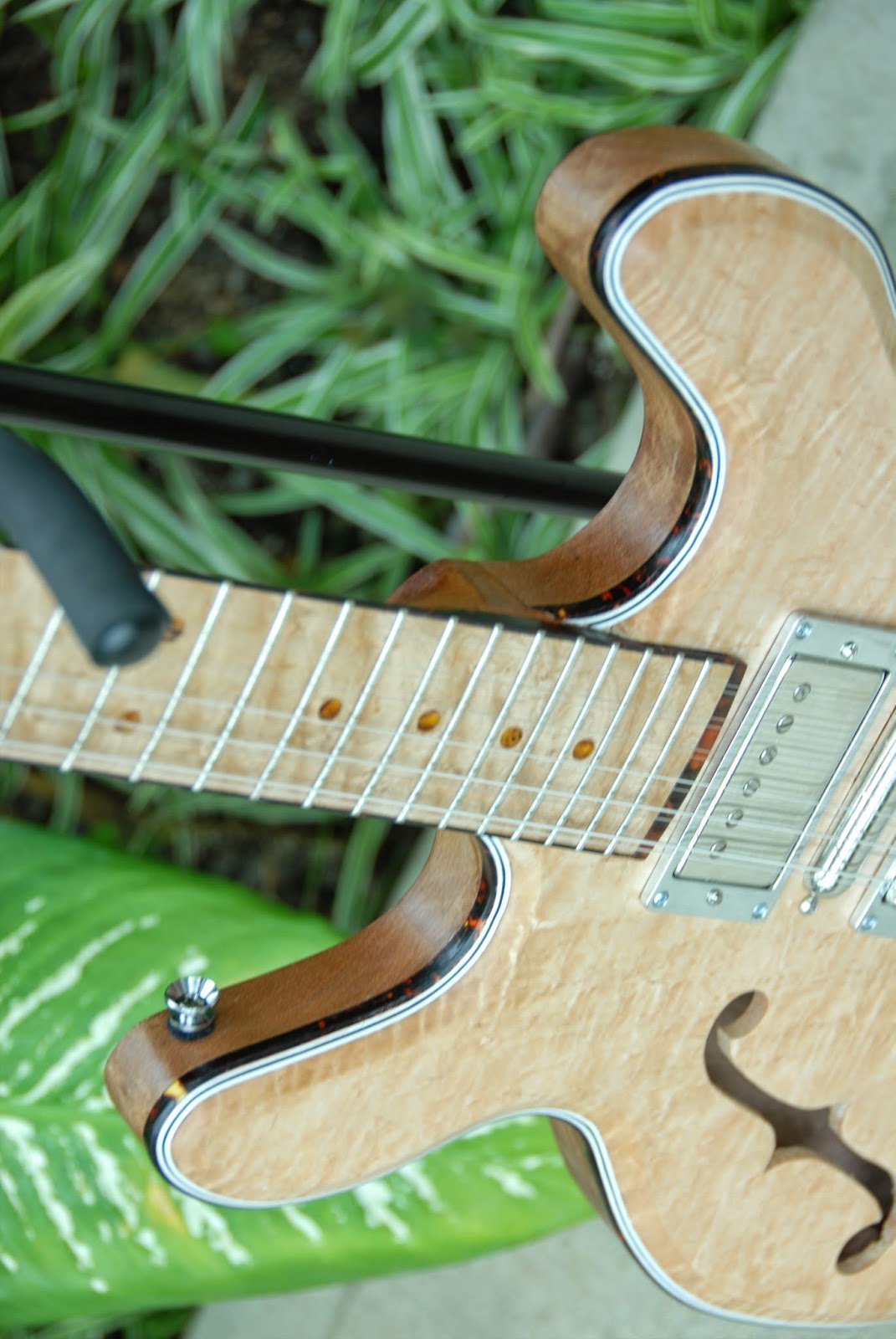 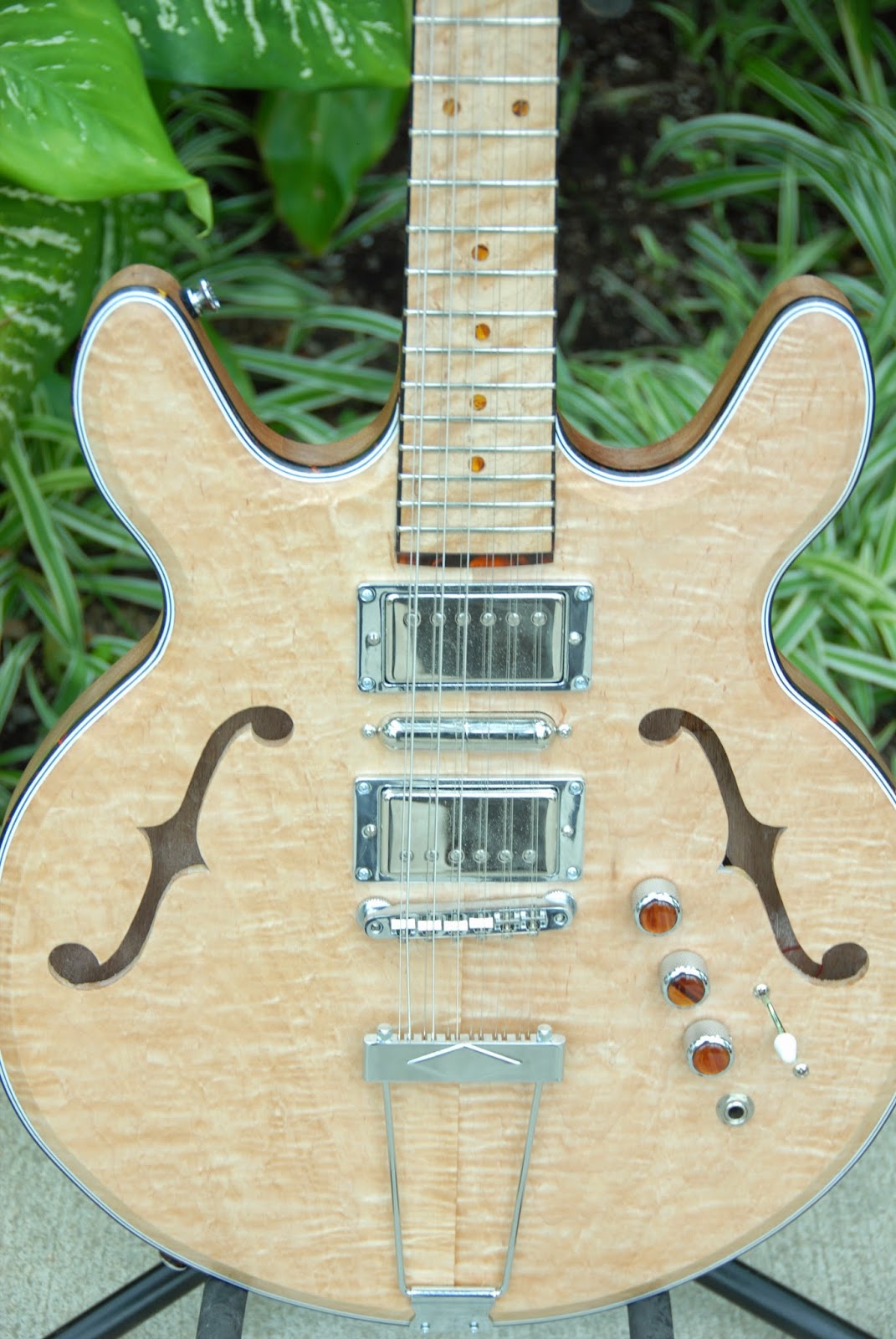 Posted by Holcomb Guitars at 1:28 PM